July 19, 2019
Yesterday was my birthday.
I was having a fun filled day, learning about South African History and Culture at the Prince George's African American Museum and Cultural Center. Nelson Mandela and I share the same birthday....as I've been saying "God don't make NO Mistakes." I am inspired by his resilience, patience and empathy for the whole of South Africa. His solidarity and the young people who stood up his name against the Apartheid will always be in my heart. I even chatted with some young women about the power of Meditation and MindBody Practices for Sustainable Living.

The museum displays a jaw dropping exhibit by Songwriter and Painter Vanessa Williams called "Catharsis" meaning pure expression. She began painting again after having been a caretaker to her 90+ year old father for quite sometime. During his last days, she had lost herself in whirlwind of responsibilities and obligations she had in this role as her Daughter. It was that sense of purpose she was missing... 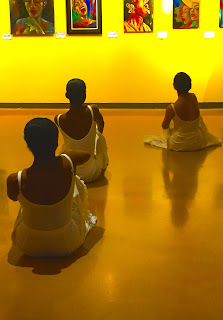 But painting helped her to return to that true nature as an Artist and Creator.

Back in June, at the celebration of the Juneteenth Season and in recognition of her work, Dance Institute of Washington youth ensemble danced a performance piece narrating Award Winning Poet Maya Angelou's "Phenomenal Woman". Vanessa says, she felt like they were "....dancing her LIFE." 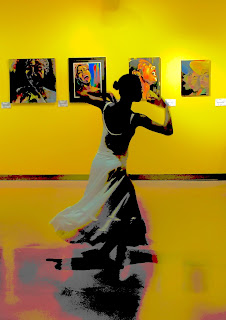 She was deeply moved, so much that she plans to paint a moment in the dance she's captured on her phone. The dance she felt gave her a new birth, it lifted her spirit from a place where she'd be stuck for so long. 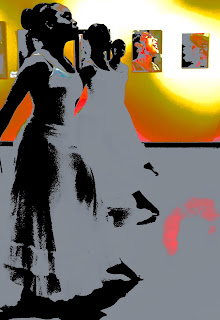 This conversation went on....more deep sighs, smiles and recollections awhile creating a new piece a sketch and portraiture of Madiba as a South African in a White Clock and traditional beaded Ubulaluh neck piece.

Before my mom and sister came to get me, I would sit and listen to the story of the Creator's Will: the Chameleon and the Salamander....what the South African's really mean when they say hello and greet each other and so much more. Thank to Researcher and Scholar Zola Dube, a political refugee now New York Resident.

So, we managed to put up a Best Western hotel in Baltimore, MD where I saw people sitting outside eating crabs.
I was in either kind of mood for cracking shells or sitting in the heat any further but I decided to keep it pleasant and cool. We entered the hotel and I looked up to notice a Marquee Sign that called itself "the Laugh Factory". Perfect. One of my wishes for insatiable laughter was about to take place....with none other than Michael Colyar as seen in a number of films since the 1990's a DEF Comedian JAM Special Comedian and household favorite in black films. 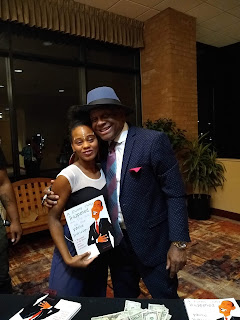 What a like most about his funny, is the fact that although he's well-known.....paid and respected--he still came out to give us a GOOD Show. The kind of show where you'd thought he was trying to break into the game. He was full of energy, life and he even brought a classic comedy prop.....A CHICKEN!

Colyar dotes about his adoration of President Barack Obama and all black people in general. He touches on growing up in a Black Mama's house. The truth about the lady in his life going out to eat and just straight facts about everyday Blackness. He's been on the road with his 100 city tour for months now all why working on his next moves including another book and a film in the near future.


The Laugh Factory has a two drink minimum  or allows unlimited soft drinks for $12.50. The menu consists of Maryland and Pub staples: fried fish, wings, fries and nachos. Tasty & Tantalizing but, I choose to pass as my body continues to vocalize the distress of Trigeminal Nueralgia reflecting in my facial muscles and neck area.

I met with Colyar after the show. No manager, no count up person or even cash box. He sold his comic books "One Day I went to White House and Knocked on the Door and a Black Man Answered" like Patty LaBelle's Sweet Potato Pies at Walmart. Hot OUT of the OVEN. Everyone want their picture with him and he was gracious. When my turn came, I reminded him that he was friends with Uncle Kruze and all was well. He liked my tribal paint marks and we vibed simply off of the the fact that I was a REAL PERSON. Those are rare to find. A lot of Love there. Good Man. And pretty darn Funny!


Happy 28th Birthday to ME.
I know it's going to be a GREAT Year.


Please consider making a contribution to my Medical Journey Fundraiser to help me try an alternative method of treatment for this rare and trying Facial Pain Condition.