August 29, 2019
"You see we don't have the kind of problems that other counties do....we are not Culture Appropriators, we are the Officiators." Graduate Student in Trinidad & Tobago

Her statement was with such conviction, strength  passion as she speaks to the cultural and ethnic divide that we face today--she speaks to the fact that the island of Trinidad & Tabogo is has such an interwoven existence-- a Mural blend of Indigenous of "First Peoples", Africans, Spanish, British, Portuguese, French Creole, Indian and Chinese.

After seeing one the submitted stories in the TTFilm Festival called, "Calcutta to Caribbean", I came realize that the Indian presence in this country has influenced significant parts of what is now a the fabric of everyday life. Hindu Temples including, the Temple at the Sea in Caroni (built by a spiritual zealate) were erected all over the island whereas Indians can worship, pray and live freely a similar. The temple provides a remembrance and connectivity to home that the first migrants left behind when they came as a pilgrimage seeking Spritual assylum or by force in servitude of British Colonizers. So, the delightful curries, spices, sauces, the music or other touches of DIVINITY.


During Carifesta this year, an Indo-Caribbean woman who recently signed onto Bollywood film combine these influences in sound and song using lanuage: Indian, French Creole, Spanish and English. She performed a medley accompanied in a duet by a Japanese colleague and singer who could sing the ballad with just as much passion and soul, whining his hips to the music like any other Trinbagaoan.

While attending an Indo-Caribbean dance class at Trinidad Theatre Workshop, I came to know that the hand gestures or Mudras studied and performed in Classical Indian dance are synonymous to learning the alphabet. Each movement corresponds to a sound in the music play on the Tabla Drum, rhythmic beats indicated by stamps of the feet and can be used to tell different stories. For Dr. Bahkaratsi and his Dancers, Mentees or Gi's which means "respected-one", they use the language and technique to tell Caribbean ethnic stories.

This is significantly different from culture integration that we experience here in the U.S. where you'd see how Asian owned establishments planted in Black communities do not interact with beyond the counter. The languages are not merged, the traditions respectively remain at a distance and instead  learn to tolerate rather than explicitly communicate.
The closest and most evident unifying pulse of American culture would have to be through Hip-Hop. It is the most reference, idolized, indoctrinated entity that gives voice and power to people regardless of their race or ethnic background. The form is pure by nature, however it is evasive enough to allow anyone to create content that that pertains to their own experience in an urban way. Although it's original intent was to authentic the African-American experience, today you have a multi-dimensional platform as presented through Hip-Hop culture that embodies a shared humanity.

I believe what Carifesta did was highlight the aspects of the African Diaspora namely Caribbean culture that are we have here in the U.S. at only a baseline experience including a few Jerk Chicken shacks, themed island nights in the club/bar, a handful of Festivals & Fairs including our own Carifesta during the summer, Hey!

I got to go inside and behind the scenes of everyday life of my Caribbean people to discover there aren't too many differences between us. That the blood of Mother Africa will always pulse through our veins but what we've done as a result of colonization is take our surroundings and re purpose them to fit our needs of adaption to the environment and become very proud of it. So that which we create with our hands, envision in our hearts and share with one another becomes that nationalism and ownership we long for.

This is evident in the enactment of pre-Carnivale days or during the post-slavery times on the island in the classic stage play Kambule meaning Procession, where you see the archetypes as presented in modern civilization developed from an early age. Learn more about it's origins and development by reading this article written on Canadian Caribbean Professional Dance Company, Ballet Creole in 2017.
Article from Star Entertainment
Ballet Creole was among the number of Canadian Delegates to perform through the island during Carfiesta XIV. They brought with them their traditional storytelling dances and theatrics from the Cuban, French Creole, Spanish and Caribbean influences by way of the Africa.


In my next blog post, I will highlight some of the individual artists and their profound work from the Carifesta Marketplace, talk about the native foods and my final takes on the Caribbean Family reunion.
Guess who gets the batton passed over for Carifesta XVI??!!!

To recap my stories LIVE follow me on Instagram
www.instagram.com/na.bee
Learn about the full Trinidad & Tobago Guide on A Traveling Black Woman Network
https://www.travelingblackwomen.com/ 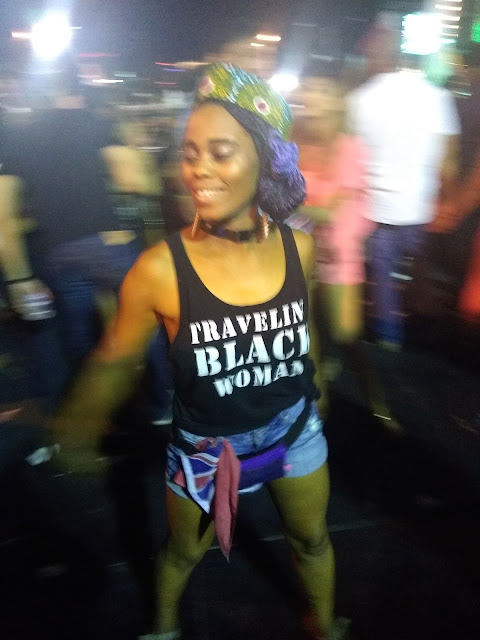 What is Black Girl Magic?

February 02, 2018
The Makers arise early this morning to receive a local news reporter in Alberquerque KQRE Channel 13 doing a feature story on the Keshet Center for the Arts. I had the privilege of leading the dancers in a GYROKINESISⓇ seated class. It turned out to be just what we all needed to prepare our minds and bodies for a day of finalizing material and preparing for this evening's tech run. I took more time on my knees to acknowledge Most High and restore my spiritual and mental welfare.  I'm learning the ins and outs of social media marketing--balancing it out with my pursuits in academia, business planning, outreach, work life all while planning a vacation. WHEW! Talk about being a real Woman with real things going on: All At Once. Here's video of a more extensive description of what's to expect in the premiere of my work: " #blackgirlmagic " Art Work by JC Holland & Renee Colbert Look to the left! If you've got a Google Account Fol
Post a Comment
Read more