September 18, 2019
This year, 2019. I travel to Sweet T&T amongst the fleet of surrounding islands in the Caribbean for time of celebration, cultural reclamation and exchange of a rich history that makes these countries irresistible. During the course two weeks, attendees would co-mingle, share, discuss, and create one community of people through the arts: music, dance, culinary art, crafts, fashion, film, literature, children expositions and more. News media, comes from all over the world for this experience CarifestaXIV demonstrating its sophistication, growth, expansion, and ability to use the arts to connect even further with one another--tolerating if not accepting the differences between countries all the more. Throughout the day there are activities, workshops and affairs taking place throughout Trinidad give you a reason to become familiarized and learned about the ways of Trinbagoans. As an American, I traveled to CarifestaXIV full of excitement and anticipation to share my experiences back home with  friends, followers and audiences who maybe wondering...where is she off to next?

By taking part in the festival as a social media specialist and commentator, I got to go inside and behind the scenes of everyday life of my Caribbean people to discover there aren't too many differences between us. That the blood of Mother Africa will always pulse through our veins but what we've done as a result of colonization is take our surroundings and re purpose them to fit our needs of adaption to the environment and become very proud of it. So that which we create with our hands, envision in our hearts and share with one another becomes that nationalism and ownership we long for.

We hear so much about the terror and negativity due to drug trafficking and the violent activity taking place across the border. It defrays us from wanting to develop real relationships with the very people whose culture we admire, rave about and occasionally buy trinkets to store in our memories like a fridge magnet in homes. The more I was entrenched in the depth and richness of the culture, the more I became aware of what I was missing, a part of myself that I knew by association every now and then. I was taught, that being Black--was just too much for people is a poor representation of the advanced or civilized human being and that I had to prove myself civilized by distancing myself from the experience and very existence of it.

I understand now, that my African Heritage is a Gift, having been taught the sophisticated measures of it's existence beyond an occasional African dance class, a good ole eye-rolling neck turning empathizing conversation amongst sistas, the Black Power fist pump in pubic or Wakanda Forever arm cross gesture. Our culture is expressive, alive, real and self-validating.

Colorism appears to be a universal issue for people of color. Some feel its affects by way of a brutal caste system that isolates people to a life of poverty and shame. While others experience underlying hints of it through exclusive society, systematic racism, cultural abuse or neglect. This is the case, when discussing the dynamic between dark/fair skinned African-Americans. One might consider the genetic makeup and cultural influences of a person and who they are: for instance a fairer skinnned/light/creme bruele skin toned female with curly silk-like textured locs might be considered a mixed, a mulatto, octaroon or creole. It's viewed a plus you discover that they indeed are Creole, to justify a more dynamic cultural influence they have in language, tradition, an upbringing than just being able to "pass for white" in the early history or being "treated better, kinder..." or seen as "more attractive"--the many pyschological schemes that have plagued our society for generations.

But truthfully, the Creole experience is more than just an exotic American mix of Spanish, French and Portuguese people. It's more than Marti Gras or the Essence Festival in the South. Creole begins in the islands of the Caribe Haiti to be exact, when Haitian slaves migrated to the Lousiana Purchase territory seeking asylum and in search of a new life. These were the more aggressive-militant Africans hold massacred plantations fighting off European slave handlers and Masters to live a free life. I think back to African-American Author, Poet and Scholar, Ntzoke Shange's choreopoem For Colored Girls ...........with Lady in.... talking to an imitation Tssaint L'Overture boy puffing out his chest about not taking no stuff from White Folks!

I believe what Carifesta did was highlight the aspects of the African Diaspora namely Caribbean culture that are we have here in the U.S. at only a baseline experience including a few Jerk Chicken shacks, themed island nights in the club/bar, a handful of Festivals & Fairs including our own Carifesta during the summer.

During Carifesta, the French Creole Country night was one of my favorites. I felt connected to the Music, the spicy sultry and lively music. The women wore bright smiles and the savory dishes sold in the Marketplace....sold out! Every night! A woman amongsts our group, from the Ballet Creole Family, Djennie Laguerre spoke about her life as a dedicated Artist and Playwright. She'd brought her daughter and mother along from Canada to share in the experience of the cultural festival representing Haiti with her.

I loved the sound of her voice, for some reason the French accent resonates with me well and with ease do the sounds make sense to my soul. The French tend to be very sure and expressive people--and I as an American limited to only Spanish 101 and Italian as an elective course in Junior High School am fascinated by bilingual people. She shares, her dedication to the life as a Creative and kept me on my toes while I was there. Taking pictures, videos, making notes for my blog--I felt validated by her presence in a crowd of people who had no idea who I was.... I am grateful.
Learn more about her:
Upcoming Event: September 12, 2019 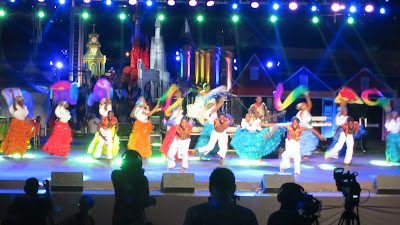 Spanish-speaking/Latino cultures were represented during Carifesta's Latin/Carib celebration showcase at the Little Carib Theatre and the during Super Concert Night which most people might've assumed that it was about popular stars: Chutney, Nailah Blackman, Machel Mantano, and Shaggy--but it was Guadelope's Music Band Kassav that stole the audiences heart.

Finally, I had a chance to catch up with Canadian-based dance company Ballet Creole who'd be performing throughout Trinidad during the festival. They bring influences from multi-dimensions of the Caribbean including but not limited to African, Indian, Haitian, Brazilian, Trinidadian and Cuban Folkloric music and dance. Spiritual, Sound and deeply studied and researched the content of the work can be recognized all over the world. 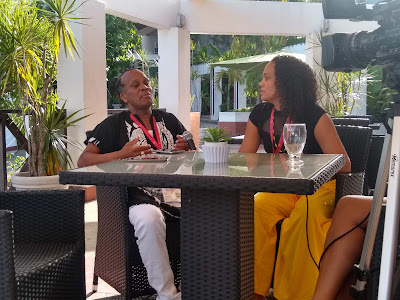 On the Day of Closing Ceremony Artistic Director, Choreographer and Accompanist Patrick Parson interviewed with a major Cuban Television network sharing his journey from life as a dance student in Trinidad to becoming a prominent dance figure in the Arts and the Cultural African Diaspora Community.

His principal dancer and founding company member: Yuhala Garcia is from Cuba and translates between Patrick and the reporter.
Parson speaks on his choice of dancer stating that the age, appearance etc. doesn't matter for him when selecting dancers. It is their passionate, commitment to the work and deep understanding of spirituality that matters for him. Yuhula, coming from Ballet Folklorico de Cuba had that focus and drive, the kind of discipline that would set a standard for his work when collaborating with other dance artists, programs and schools.

Discover more about Ballet Creole by visiting them online: https://www.balletcreole.org
Reach out, if you find yourself in Toronto, CA.
Stay up-to-date with their events and tour schedule.
Book them for your next Arts or Cultural Affair. 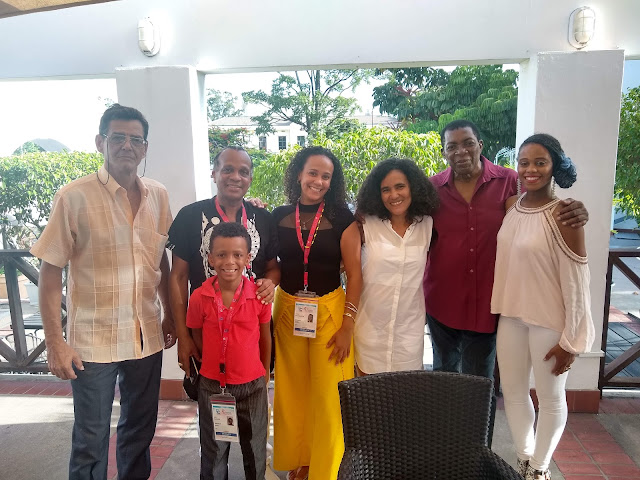