Health is a Must but who can we Trust?

There is a saying, “…it goes without saying.” But some really things should be said, repeated even if necessary. What is happening in our today world today is tragic, with seemingly no end we are suffering the consequences of poorly planned and loosely executed a Global Health Crisis response to this unrecognizable disease—the Coronavirus. The devastation, that was brought on by its spread supersedes job loss, stock market crashes and a jarring economic backpedal since the spring of 2019. Worldwide, the hit took a tool on our entire way of life in the US and for the whole humankind here on planet Earth.

Those who acted heroically in response to these events, as volunteers, missionaries, donors, helpers, teachers, galvanizers, medical aids and more are the heroes on the ground. But outside of the hospitals, low-income individuals a suffering severely, just to remain afloat. Because of the lack of support and resources that in particular Black, Brown, Latino and Native American communities have they are less likely to seek care or be offered care at the rate of which they need it most. 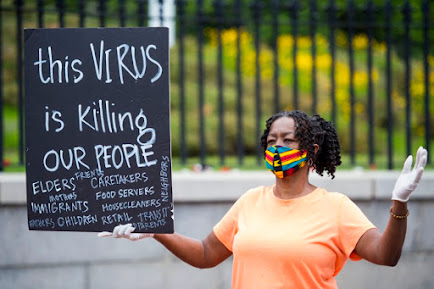 This is an understatement. Well before the pandemic people of color had a distrust for hospitals, urgent carer centers, clinics or doctors in general. The medical system’s biases continue to marginalize Black and Brown bodies as “case studies” —stating things like: they are more tolerant to pain, apt to respond to a list of medications so insurmountable you’d think the minority were given VIP Access to the pharmacies [….and in fact are targeted, with offers in the form of cash or VISA gift-cards in exchange for testing, bloodwork and or early dosages of vaccination and medicines.] and that more apt to to adapt and respond well to occurrences of physical trauma and pain. Sound Familiar? Slavery. Unethical medical practices. The boom of the Medical Industrial Complex.

When looking closer at what’s happening on the ground, in Black and Brown homes neighborhoods are where one might consider to be known for the double struggle. (Financial & Societal) Triple, now that we see how the virus causing if not furthering mental and emotional instability. Individuals who are without support or a sense of community to deflect the mental and emotional trauma that is brought on by the uncertainty of these times are in an even more grave state of being.

During a tour while visiting St. John US Virgin Islands the taxi guide drove us up to a high hill that overlooked the land and water from a distance. He pulled up to a salmon pink colored building without saying a word and hopped out. We that he was running inside to do an errand or speak to someone—but he was coming around to us to explain that we were sitting in front of a historical landmark. The first Hospital proper, on the island—Myrah Keating Smith Medical Center.

It was closed indefinitely due to damages from the recent Hurricane. Kenneth, the guide’s name, revealed to us that it’s capacity could only hold about 16 beds in total so we tried to make sense of the facility that sat across the the way—the Interim Clinic of which they called a Modular.

The old Myrah Keating Smith Community Center facility, sitting 20 feet away from the modulars, is shuttered, according to Smalls. With metal service doors blocking the front entrance, the only access is through back doors close to the old ambulance bay. “The building suffered significant water damage and is not habitable for patient care, Smalls said. Absent ceiling tiles throughout the facility expose wires and cables, and in some rooms mold has flourished from the lack of light and ventilation and the abundance of moisture. Stacks of old chairs occupy the hallways and old hospital beds crowd the defunct observation room. 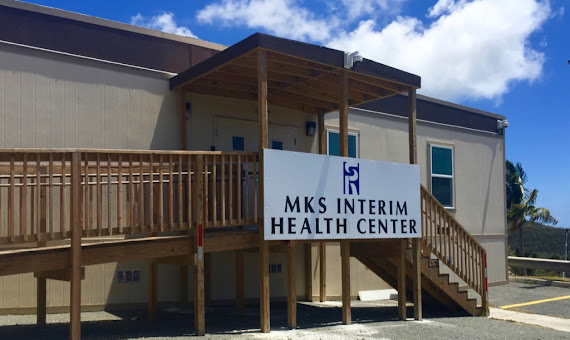 On site, it took me back to high school trailers that we called, Temps. Small with low ceilings made from wood and powered by generators that was meant to serve as it’s name indicated only as temporary accommodations. I was shocked. Read More: https://stthomassource.com/content/2019/03/25/st-johns-modular-hospital-now-open-for-business/interim-mks/

Just to think of the alarming number of cases and how they were able to compete if at all with other islands in a place like this. Apparently no patients were actually admitted inside for the most part a tent was set up outdoors. If one were to get sick, they’d have to be flown by helicopter over to St. Thomas for treatment, thereafter receiving a medical transportation of build starting at $6,000 USD. In short, Kenneth stated what most Black parents tell their children—“…don’t get sick, we can’t afford it.”

These and other many sayings that Black and Brown individuals live by have become household proverbs that children grow up with, to safeguard them from debt and disappointment. After Dr. Susan Moore died in an Indiana hospital, her final words referred to the mistreatment and negligence from her doctor in hospital raised eyebrows about what all should be included in this recovery plan: training on ethical patient interaction, programs that offer out-patient counseling and trauma support and so much more.

I believe that there is hope for future. And this looks like more than representation in the profession but action steps that address this mistrust for the medical system, that integrate holistic practices as a legitimate and not subsidiary approach for patients and that neutralize costs for low-income citizens. 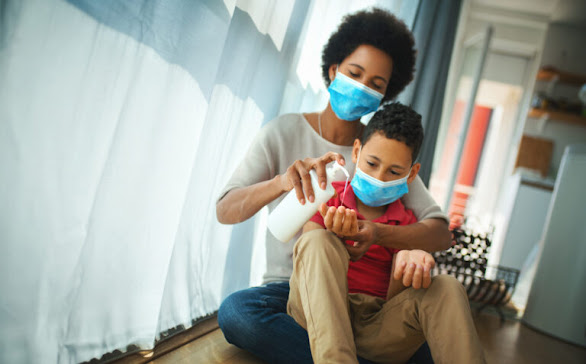